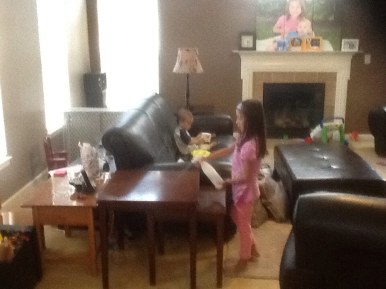 A friend recently asked me how I have time to clean my house when I homeschool a second-grader and a toddler entering the terrible twos.

I don’t have time to clean.  I DO NOT LIKE cleaning.  But I have learned to make time.

This past school year has been a roller coaster of schedule changes.

1. The first quarter I literally did not know how to clean because I was so overwhelmed by so much.

2. The second and third quarters, I decided that we would clean during the mornings and then I would teach my daughter during my son’s nap time.  This worked okay for me.  Except we couldn’t be consistent with keeping the house cleaned AFTER school.  Which means, this method was not really working for anybody.

3. The fourth quarter (now), we have decided we are going to have a better bedtime and wake up schedule in this house.

We have been waking up and getting ready for the day, and reading our devotions during breakfast.  Then school begins and is over before 11:30 a.m.  Lunch is at 11:30 a.m.  Any remaining school is finished.  By 12:30 p.m. we are done and ready for cleaning.   Nap time for the Mister is around 1:30-2.  During his nap, Mommy and daughter time commences along with any other things we need to pick up.  Snacks.  Dinner.  Baths. Bed.

If you know me, you know that cleaning is a constant struggle for me.  That’s why I was delighted to find Shaklee’s GET CLEAN line in 2010.  I was overcoming extreme fatigue at the time.  How would I clean when I was so tired?  When I finally got to cleaning, my lungs would react horribly to the fumes while cleaning my shower.  I had to literally wear a face mask just to do the job.  Since using the entire GET CLEAN line, I can even feel comfortable having my toddler help me with the laundry and dust my counters.  I love the fact that stains from blood, to grape juice, to grass – all come out of our clothes with minimal effort.  I love that I can get mildew off my shower without holding my breath with Basic-G and that Basic-H does everything else from cleaning my vegetables, to getting silly putty out of kids clothes, to cleaning my counters…. and I’ve had the SAME 16oz. bottle for 4 YEARS!!!!  FOUR YEARS!  That part seals the deal for me, not to mention it would take $3,400 to get the same clean from other products that make my lungs feel like they’re crumbling.  Or the thought of how many bottles I would be wasting.  Or, more importantly, my time being wasted just going down the cleaning aisle of the store to replace a bottle.  When, at home, I just make a new bottle whenever I need it. 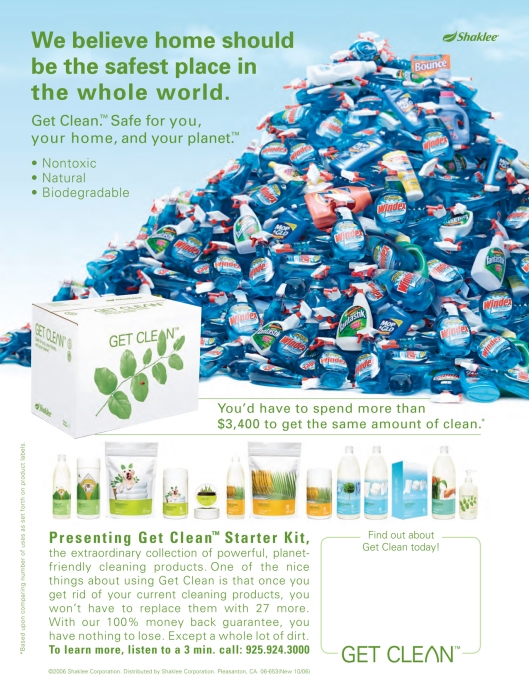 I was also amazed by how many kids are affected in our schools by these cleaners constantly around them.  So many cleaners today are directly related to allergies, asthma, autism, ADHD, and more.

Shocking too, was the fact that stay-at-home-moms were the most likely to develop cancers due to the fact of toxic cleaner usage alone.

Please leave a comment and tell me how cleaners have affected you.  I am so accustomed to green cleaning now, my nose will detect Windex from the other side of the room and make me cough.  I am constantly changing how I clean my house, but am thankful I can always rely on Shaklee. 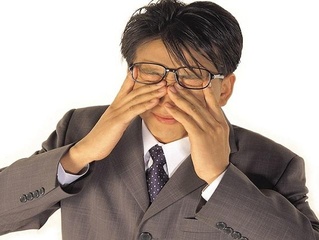 This picture reminds me of so many this year in Cincinnati who are telling me that their seasonal allergies are so bad that they want to claw their eyes out.  It is awful!  The sneezing, the congestion, and literally rubbing your eyes raw. If this is you, my heart goes out to each and every one of you!

If you have tried allergy shots, Claritin, Flonase… and the list goes on and on – and you’re still finding only temporary relief – there is hope for you!

My dad has horrible seasonal allergies.  You can hear him sneeze a mile away.  His eyes get soooo red.  One day my mom was using her Shaklee Purifying Toner* and wondered if the integral ingredient called Beta Glucan would help his eyes if she poured it onto a cotton pad and laid it on his eyes as a compress.  My dad was desperate and tried it.  Within 15 minutes, his itch was relieved!  Sometimes he would have to reapply the compress, but every time the itch would be gone!

My husband also has the exact same red eye problem.  He was skeptical that this could really make that much of difference, but my mom insisted.  He also could not believe the relief!

Really stopping allergies from appearing at all, however, requires internal treatment.  All allergies stem from a basic malfunction of the immune system.  If you feed and restore the immune system naturally to a balanced state, the allergies will diminish and disappear completely.

But don’t take my word for it!  Please take a moment to read my friend, Stan’s, testimony:

“I grew up with severe allergies and consequent chronic sinus infections.  I stuffed every pocket full of Kleenex every day before I went to school.  Sometimes I would run out before lunch be traumatized for the rest of the day because I was too shy to raise my hand and ask the teacher for some Kleenex.

Over the years, at one time or another, I’ve used every OTC drug you buy that ended in “-aid” or “-off.”  Sine-aid, Sine-off, Alleraid, Alleroff, and the like.

When I was a sophomore in college in 1971-72, my mother took me to an ear, eye, nose, and throat specialist every single month.  He put me on tetracycline for the chronic sinus infections, which I took continuously for almost 3 years.  Today they say you shouldn’t take it for more than 3 months.  I ultimately just stopped it because I couldn’t see that it was doing anything for me.

The one thing the tetracycline DID do was permanently damage my immune system so that I developed a severe allergy to cats which I did not have before.  I can just sit down by someone in church who owns a cat and start having a severe allergic reaction.

In April 1993, during the annual explosion of dogwoods and azaleas in Athens when I would usually be suffering tremendously, I providentially discovered the secret to eliminating any allergic reaction at all during most days — which for me was an absolute miracle.  In subsequent experimentation, I discovered how to stop an allergic reaction in its tracks.

I took 3-4 Immunity Formula I all at the same time in the morning with my Shaklee protein for breakfast.  This greatly reduced my tendency to have a reaction during the day.

It is that simple.  But I personally found that it was important that I took 3-4 all at once in the morning and then 3-4 more anytime I was having a reaction.  Spreading it out didn’t work for me.

Our youngest daughter is the only one of our children who inherited my tendency toward allergic reactions.  When she was just 3 years old, she’d be sitting in the high chair eating breakfast  and eat something that caused her to start having an allergic reaction (we generally eat only fruit, Shaklee protein and supplements, and whole grain toast for breakfast).  It was usually fresh pineapple that would sometimes cause her to react.  Her eyes would start itching and turning bloodshot, her nose would start running, and she’d start sneezing.

I would give her 1 Formula I, and it would knock the allergic reaction completely out in less than 5 minutes.  She couldn’t swallow supplements yet, so she’d have to chew it.  It is extremely vile tasting, but she’d chew it real fast and I’d give her something to wash it down quickly.  Even though it was extremely vile, she could see at 3 years of age what it was doing for her, and if she was having a reaction, she come say, “Dad, I need a Formula I!”

JoAnn carries a little bag of Immunity Formula I for me in her purse at all times in case I get into a situation where I start having a reaction.  I can just sit down beside someone at church who happens to own a cat and start having a severe allergic.

But the effects of taking 4 Formula I every morning for years has had a cumulative effect, and after about 3 years I hardly ever had any tendency allergic reaction anymore — except to cats.  But for 14 years now, the severe sinus allergies that traumatized my childhood, teen years, and young adulthood have been no more!

There is something unique about Formula I.  I also take lots of Vita-Lea and other supplements and get lots all the things listed on the Formula I label from other places.  But NOTHING did what Formula I did for my allergies!”

*Update 3/14/2019:  Unfortunately, Shaklee has discontinued the Shaklee Purifying Toner.  There has been a replacement toner for skin, which is amazing!  However, this toner is not effective in the treatment of seasonal allergies as the previous one.  It IS WONDERFUL for the skin, however.  If you are interested you can check it out here. 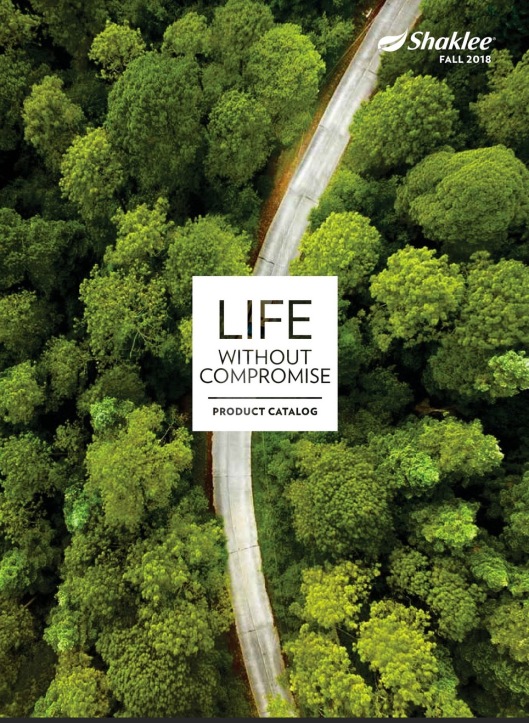